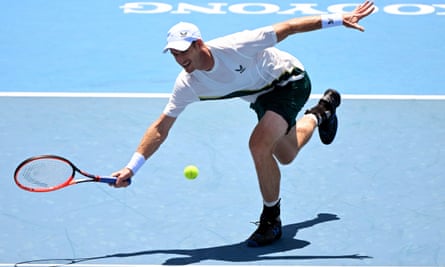 Andy Murray was dissatisfied when he left Wimbledon last year after another exhausting British grass-court summer. Even though he had done nothing wrong, he had been defeated by the massive American John Isner in the second round. Isner served 38 aces in a brilliant match, and his performance highlighted a clear problem: Murray’s position.

Murray was completely dependent on the draw because he was not a seeded player. He tried to fix that the rest of the summer by adding tournaments to his schedule. He went straight to Rhode Island to play in the Hall of Fame Open, a low-level tournament that ends the grass-court season. Murray, despite his impressive feat of regaining the top 50, was unable to maintain his position in the top 32.

His unseeded status gave him one of the toughest possible tournament draws on the eve of the Australian Open. In the first round, he will compete against Matteo Berrettini, the 2021 Wimbledon runner-up and semi-finalist from last year.

In his pre-tournament press conference,Murray did not show any frustration in spite of the difficult draw.

Clearly, a difficult draw,” he stated. However, I also have the impression that I am in a much better position than I was prior to any of the slams this year. I feel well-prepared and ready to face a top player early in the tournament, whereas perhaps last year my game wasn’t always at its best.

He has good reasons to be optimistic. One of the few times Murray has arrived at a grand slam tournament in recent memory without any physical concerns is at this year’s Australian Open. For instance, Murray’s grass-court season had begun with a strong run to the Stuttgart final, but he suffered an abdominal injury in the third set of his match against Berrettini, which halted his progress toward Wimbledon. In every warm-up tournament during the US hard-court swing, Murray experienced severe cramping.

A successful offseason is the source of Andy Murray confidence.

He had lost to Gilles Simon in the Frenchman’s final tournament after serving for an easy win, which was one of his worst performances in the past four years. Murray later expressed dissatisfaction with his preparation and training. He now feels as though he is moving as well as before his hip surgery.

He stated, “Obviously, I worked a lot on that in the off-season.” “There was some stuff in my game that I was struggling with for large parts of last year.” I feel like I was able to make some improvements in the off-season and feel a little bit more at ease with my game because it was the first time in a long time that I had six to seven weeks of work without interruption from anything.

During their match at the Kooyong Classic last week, Andy Murray takes on Alex de Minaur of Australia. William West/AFP/Getty Images One obvious difference is that Murray’s coach, Ivan Lendl, has been with him in Australia. Lendl had limited his travel since rejoining Murray’s team in the middle of last year, and he had mostly coached Murray from home.It’s interesting that I’m not having as many aches and pains as I used to.

It remains to be seen whether Andy Murray optimism will result in a positive outcome on Tuesday.

After having surgery on his hand the year before, contracting Covid on the eve of Wimbledon, and missing the final months of 2022 due to a foot injury, Berrettini is still trying to find his rhythm. Despite this, he is extremely difficult to play against due to his enormous arsenal, immense mental toughness, and propensity to play his best tennis during grand slam competitions.

Murray is still one of the best players in the world, and he is in good health, optimistic, and training well at the start of the new season. Most importantly, he still has the privilege and ability to work each day toward his personal objectives while competing in front of 15,000 spectators. Because it won’t last forever, this is a time in his career to enjoy; to give it his best shot and just see where it leads.