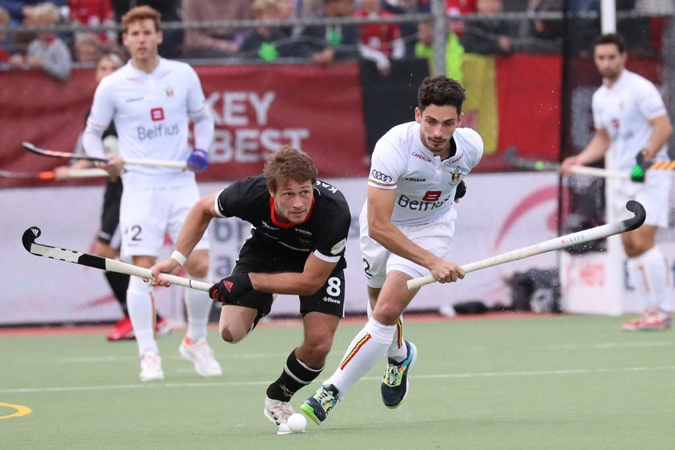 Players from Belgium and Germany in action on Tuesday at the Kalinga Stadium in Bhubaneswar during their Pool B matchup in the FIH Odisha Men’s Hockey World Cup 2023.

At the FIH Odisha Men’s Hockey World Cup 2023 in Bhubaneswar on Tuesday, a high-octane Pool B matchup between Germany and high-flying Belgium ended in a 2-2 draw.

Both teams competed for possession in a high-intensity start. However, Belgium’s all-out attack gave them a slight advantage when they won their first penalty corner in the fifth minute. However, they narrowly missed the opportunity. After a minute, the Red Lions had another chance, but Germany goalkeeper Alexander Stadler made a great save to deny the goal. Germany pressed hard, but Belgium goalkeeper Van Doren Loic’s acrobatic effort in the eighth minute cost them a straightforward opportunity. Finally, Belgium, the defending champions, were rewarded for their relentless attack in the ninth minute when Charlier Cédric scored from the right flank. At the end of the first quarter, Belgium led 1-0.

Germany got back in the game during the second quarter. In the 21st minute, a close chance was missed.

But they made up for it quickly and scored an equalizer in the second minute when Wellen Niklas smashed the ball into the bar with a powerful hit from the left flank.

The first half came to a 1-1 draw. In the third quarter, neither team was particularly distinguishable from the other, despite some intense fighting. In the 39th minute, the Red Lions had a penalty corner opportunity, but they were unable to convert it into a goal. Even though both teams played aggressive hockey in the third quarter, there was no action. In the final quarter, Belgium and Germany tried their best to break the tie. In the 52nd minute of the match, Germany won a penalty. With consummate ease, Grambusch Tom converted it to give them a 2-1 advantage. Belgium rose to life right away without activating the panic button. Within the first two minutes, Wegnez Victor scored to make it 1-1. In the closing stages of the game, both teams prevailed over a few scary moments to settle for a 2-2 draw.