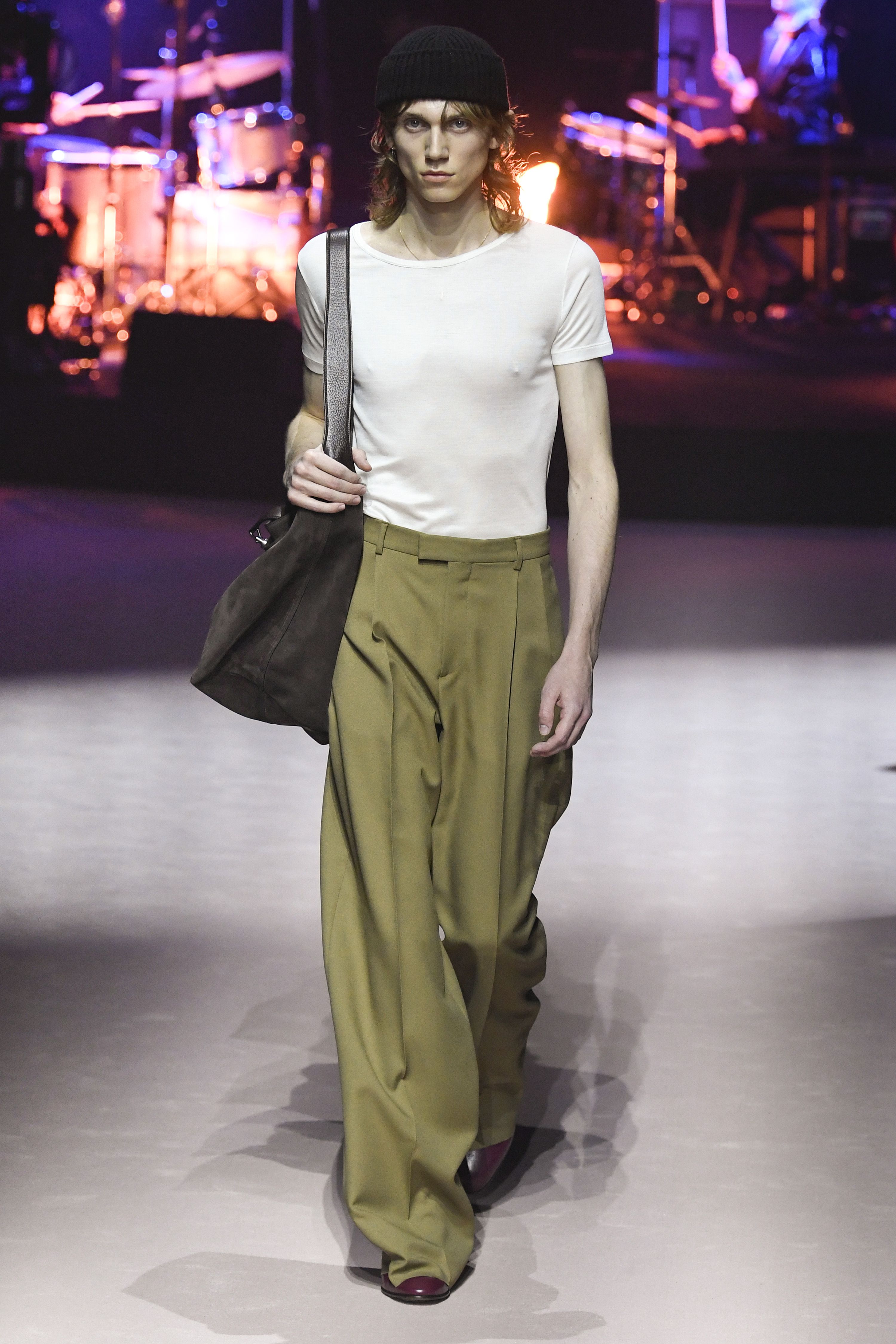 As part of a strategy to revive the brand’s rapid expansion, Gucci held its first menswear show in three years on Friday to kick off Milan Fashion Week. However, the show ended up being a low-key, transitional affair because it was Gucci’s first appearance since the departure of designer Alessandro Michele in November.

The collection, which was signed by Gucci’s studio team, still contained Michele’s signature: In androgynous ensembles like dance rehearsal leggings and ankle booties, his quirky, gender-fluid style persisted. However, the majority of the garments were devoid of the maximalist embellishments that were characteristic of the designer’s work.

Gucci’s stated in a statement that “the timing of the collection represents a moment of reflection,

Reaction, and reorganization” and that the house “investigated the idea of improvisation as an aesthetic” as a result.

Naturally, fashion groups have a long tradition of reducing runway budgets during designer tenures to reserve financial resources for the brand’s subsequent phase. We can’t blame them for being in transition, “Thomas Chauvet, a Citi analyst, stated. It stands to reason that they wouldn’t want to push on a collection by the studio of a designer who is no longer there; rather, they would want to push on the next designers.”

Look 1 from Gucci 2023 Autumn/Winter collection. However, there are numerous approaches to transition management,

Gucci’s strategy is in sharp contrast to that of its rival Louis Vuitton. The LVMH flagship has invested in bigger and more memorable menswear outings than ever since the death of menswear designer Virgil Abloh in November 2021. It has paid tribute to its late designer with sprawling collections full of couture-level craftsmanship, elaborate sets, and performances by music stars like conductor Gustavo Dudamel and rapper Kendrick Lamar.

The most recent chapter of Vuitton’s collaboration with the artist Yayoi Kusama is one such large-scale marketing initiative that does not rely on any particular designer to keep the company’s buzz going. Analyst estimates indicate that Vuitton was able to achieve record sales of over €20 billion last year by maintaining its marketing spending.

Gucci, of course, is a distinct brand with a distinct past and current circumstances.

Despite Gucci spending approximately €700 million on marketing, the brand’s growth trailed key competitors for the third consecutive year. Consumer enthusiasm for Michele’s aesthetic had cooled in recent seasons, whereas Abloh’s products were hotter than ever. However, there are also deeper differences.

Gucci maintains a high exposure to ready-to-wear and footwear, generating approximately half of its revenues from seasonal products, in contrast to rivals like Vuitton and Hermès, whose businesses are heavily influenced by accessories that are carried over from season to season. In the past, Gucci’s creative directors have had significant influence over the brand’s retail concepts and marketing message as well as its products.

According to Chauvet, “Gucci’s DNA is established in the minds of consumers as a brand that makes strong fashion statements.” The fashion-driven strategy has the potential to propel explosive growth when it works. But for a company of Gucci’s size, relying too much on one designer’s vision could lead to instability.

Kering, the owner of Gucci, has revealed to investors that the company intends to add a more timeless, iconic dimension to the label alongside its seasonal collection.

Gucci’s reach extends far beyond ardent fashionistas at its current size. In addition, the pandemic’s surge in demand for classic Chanel flap bags and Hermès Birkins indicates that a large number of customers place more value on consistency than on novelty. Gucci could avoid another boom-and-bust cycle with a strategy that is more consistent and less dependent on designers.

However, realizing this goal won’t happen overnight, so the company is urgently looking for a new designer right now. Investors are awaiting Gucci’s announcement of its new creative director ahead of Kering’s annual results in February. However, Michele’s enduring popularity among many Gucci devotees makes him difficult to emulate, and even if the company is able to quickly identify its new creative leadership, it will likely be months before its new products are available in stores.

Prior to what it hopes will be its next creative “big bang,” Gucci appears to be dimming the lights. However, management should be careful not to reject them excessively.