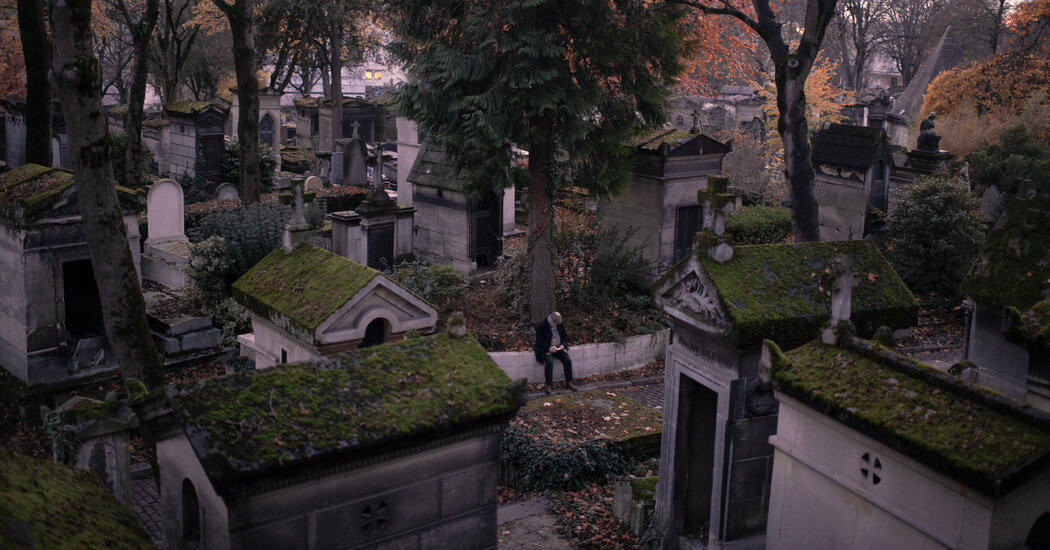 As Benoît Gallot wandered across the rough terrain, dry leaves in Paris ruffled under his steps. Coming by bushes of tree and senior, he pulled aside their foliage to uncover a disintegrating stone corridor. Squawked from high in a nearby tree, a parakeet. Wild and Free

The scene appeared to be deep within one of France’s lush forests, but it was actually inside the Père-Lachaise cemetery, one of the world’s most popular burial grounds located in eastern Paris between busy avenues.

However, it has also evolved into a haven for the city’s flora and fauna in recent years. Foxes and brownish owls are among the numerous creatures calling it home.

As Mr. Gallot continued to walk among the tombstones covered in weeds and vines, he said, “Nature’s taking back its rights.” He was the curator of the cemetery and was in charge of maintaining the grounds and assigning burial plots.

As the dense capital is redesigning its urban landscape to make it more climate-friendly in the face of rising temperatures, the greening of the necropolis is the result of a decade-old plan to phase out pesticides and turn the cemetery into one of Paris’s green lungs.

Mr. Gallot stated, “We’ve made a complete turnaround.” He added that the Père-Lachaise demonstrates that “the living and the dead can coexist.”

The 110-acre cemetery, which opened in 1804, was named after Louis XIV’s confessor, the Rev. François de La Chaise d’Aix. It is perched on a hillside with a view of central Paris. The earliest headstones lined up side by side with plants and trees in a park-like setting.

Then, in the second half of the last century, intensive weeding caused nature to retreat even further. According to Bertrand Beyern, a cemetery guide and historian, France and other Latin countries have favored rather austere, stony burial grounds, in contrast to Northern and Central Europe, such as Austria and Britain, where tombstones spread across verdant landscapes.

He recalled how, several times a year, he and others would spray burial plots with gallons of pesticides. The “golf green” mentality was at play.

In 2011, the municipal government of the city of Paris encouraged Paris’s cemeteries to phase out pesticides out of concern for the environment. Mr. Gallot, who was working at a different cemetery on the outskirts of the capital at the time, said he was initially “very hostile” to the idea.

He was, however, won over by witnessing the reemergence of birds and flowers.

Xavier Japiot, a naturalist employed by the Paris municipality, stated that a “rich ecosystem” had developed as a result of the complete prohibition of weedkillers by 2015.

The white, pink, or lavender cyclamen flowers’ kidney-shaped leaves have sprouted between raised crypts. In the vast canopy of the cemetery, whole choirs of birds, including robins and flycatchers, have settled.

A few guests have found the progressions pleasant as well as the consoles.

Philippe Lataste, a 73-year-old retired man who was wandering the cobblestoned alleys of the Père-Lachaise, said, “This natural diversity distracts your attention from death.” It’s less terrifying.

During a particularly difficult time of mourning, the most spectacular influx of Wild and Free occurred: the crisis with the coronavirus Mr. Gallot saw a pair of foxes and their four cubs in the cemetery in April 2020, a rare sighting within the city limits in a ghoulish Paris under lockdown.

Mr. Gallot recalled a time of “nonstop funerals” and said, “To see these cubs at that moment, it felt really good.”

A new pool of visitors has emerged as a result of the site’s greening, and the annual total now exceeds three million.

Despite the bitter cold that made their noses red, 20 of these nature lovers went on a Sunday morning bird tour in the cemetery. With binoculars in hand, they carefully listened to the observations made by amateur ornithologists Philippe Rance and Patrick Suiro, who have made the Père-Lachaise their new playground.

With one hand holding the binoculars and the other balancing on a tombstone, the group froze at every chirp of a chaffinch or thrush. The site’s most renowned species are the rose-ringed parakeets whose green plumes and sharp chatters are glaringly obvious. Since then, flocks of the birds have spread throughout France’s capital.

In the past two decades, Mr. Suiro claimed to have counted more than 100 different bird species. He couldn’t help but be happy to see that the cemetery’s once-huge cat population has shrunk, primarily as a result of sterilization procedures that have made way for robins. The cats were fed by feline fans who left kibble in open vaults.

Mr. Suiro, an enthusiastic naturalist, has also documented dozens of orchids, which he likes to refer to by their Latin names. During the Sunday tour, he exclaimed with glee, “Epipactis helleborine,” pointing to a frail stem rising between two moss-covered gravestones.

According to the cemetery guide and historian Mr. Beyern, the Père-Lachaise’s greening reflected a broader shift in societal attitudes toward environmentalism.

The cemetery’s canopy aids in mitigating the effects of increasingly scorching summers in Paris, a city with a low tree cover. Eco-friendly cemeteries, which encourage the use of biodegradable coffins and wooden grave markers, have sprung up all over France.

But right now, according to the curator, Mr. Gallot, they are busy chasing runners and picnickers who have set up picnic blankets. World News Spot

Nevertheless, Mr. Gallot stated that he enjoys the concept of a busy cemetery.

It would stand in a small garden near a robin’s nesting shrub. A grower would act as a watering tank for foxes and a pool for birds.